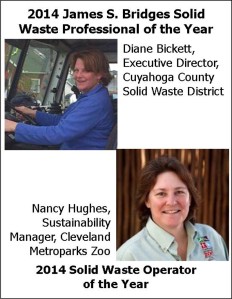 SWANA Ohio Executives of the Year 2014

The full text of Diane’s award recognition can be found on the SWANA Ohio Buckeye Chapter website.

As Sustainability Manager of the Cleveland Metroparks Zoo, Nancy Hughes is responsible for:

Through Nancy’s influence, the zoo’s Master Plan includes a sustainability goal, and, as a founding member of ZeroWaste NEO, she continues to promote the principles of Zero Waste throughout the community.

The full text of Nancy’s award recognition can be found on the SWANA Ohio Buckeye Chapter website.

Want to stay in touch with the latest recycling news in the Cleveland area? Just click on the Follow button at the bottom of my blog Home page, or subscribe to my Examiner.com page.

I last posted to Keep It Out of the Landfill on October 28 of last year. At that time, I was nearing the end of an eighteen-week cycle of chemotherapy, subsequent to cancer surgery in April and May of 2014.

Not to worry: the surgeries had gone well, chemo was, except for a serious lack of energy, relatively trouble-free, and follow-up scans were clear. By early December, I was looking forward to radiation therapy (“looking forward” in the sense of “let’s get past this”) and the return of my hair, and hoping to resume a normal writing schedule within a few more weeks.

But life had other plans for me. On December 16, I broke my left hip. (Again, not to panic: a hemi hip replacement the following day, therapy beginning the day after, and discharge to a rehab facility on December 21 quickly dispelled my initial fear that I would spend the rest of my life in a wheelchair.) After about three weeks in rehab, I came home, ambulatory and able (thanks to some outstanding physical and occupational therapists) to live my life — if, for now, a little more slowly than before.

While all this has taken time, I am now getting back to one of the driving passions of my life: Keep It Out of the Landfill. And I’ve realized that I need to narrow my focus: the universe of solid waste management is too large for me to address with the resources at my disposal.

So while my blog will continue to discuss various aspects of solid waste management, future posts will largely concentrate on the issues about which I have the strongest feelings: food waste and extended producer responsibility.

Over the next couple of weeks, I’ll explain how those two issues fit into the solid waste management universe and why I chose to focus on them. Meanwhile, treasure every moment of your life. And every day, aim for zero solid waste: Keep It Out of the Landfill.